Wrestling has a rich history in Lucknow. Akharas or traditional schools of wrestling trained wrestlers in the techniques of the sport from the time of the Mughals. The tradition and interest in the sport has continued in the modern era with many wrestlers going on to represent India in wrestling championships. The regional centre of the Sports Authority of India in Sarojini Nagar sees regular training camps being held for wrestlers. Lucknow also regularly hosts national senior and junior men’s and women’s wrestling championships. 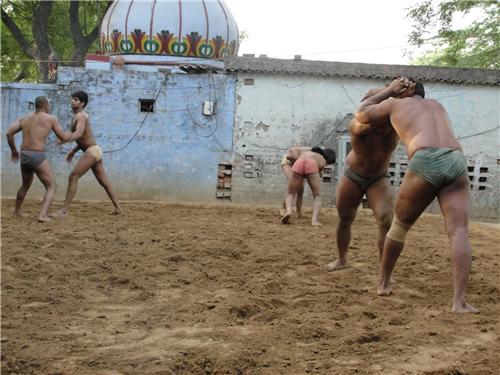 Regular wrestling camps are organized in Lucknow by the Wrestling Federation of India especially before competitions abroad. These include training in the free style and Graeco-Roman style of wrestling. Female wrestlers also take part in these training camps. The training camps are held at the Sports Authority of India.

At the local level regular dangals or wrestling competitions are held in the city. Local wrestlers trained in the traditional style of wrestling compete with each other and display their unique style to cheers by followers of the sport. Such a wrestling championship has been held every Christmas at the RDSO stadium as a symbol of communal harmony. It was launched 30 years ago by three friends, belonging to different religions, and is today more a platform to celebrate traditional wrestling than a competitive tournament.

At the Girdhari Pehalwan Akhara in Ganesh Ganj one can witness the sport of traditional Indian wrestling or kushti. This is only one of many akharas in Lucknow where the sport is still practiced.
The akhara is where most wrestlers in Lucknow gain their spurs. Joining it as young as 10-year-old, many boys grow up here to make wrestling a way of life, taking part in various competitions till they are noticed to be picked up as part of the national team.

The typical pahelwan or wrestler wakes up before sunrise, runs for a few miles to build up his stamina, goes about his ablutions, spends some time in prayer and then wears the wrestler’s loincloth and anoints his body with oil before stepping into the akhara.

The akhara is a mud pit from which all stones and rocks have been removed. It is then sprinkled with buttermilk, oil and red ochre to get it ready for wrestling.

Training sessions see wrestlers paired off to perform various wrestling moves for strength and exercise. Each move has to be executed to perfection with minimum of effort. After a few hours of this the wrestlers end the training session by rubbing their bodies with the mud of the akhara to reinvigorate their bodies. After it has dried the mud is scraped off and the wrestlers then bathe, eat and rest. After being refreshed the wrestler spends some time training again in the evening.

The wrestler’s diet usually consists of litres of milk, pounds of almonds, spoonfuls of ghee, a dozen eggs and many chapattis. He is expected to abstain from alcohol and drugs to maintain a sense of discipline.

The traditional wrestling styles include the Hanuman style throw, the Jambuvanthi joint locks, the Jarasandhi style for breaking the joint locks and Bhimseni style for slamming the opponent’s body down. A match could last 20-30 minutes unlike modern wrestling where bouts last a few minutes each.