The lower house of provincial state legislature is often termed as Vidhan Sabha or Legislative Assembly of different states of the country. A member of Vidhan Sabha is an elected representative of people in any one particular state and they are being elected by millions of citizen in the state. However, the electorate should be above 18 years of age. As per the Constitution of India each state should not have more than 500 Vidhan Sabha members and not less than 60 members. Each term of Vidhan Sabha is capped for a period of 5 years and each person elected can enjoy the duties and responsibilities of the office for a maximum five years except in case of emergencies when the term is extended. Special powers are provided to the members of Vidhan Sabha and it is an important part of the Government body of each state of the country. Vidhan Sabha is an integral part of the Constitution of India. 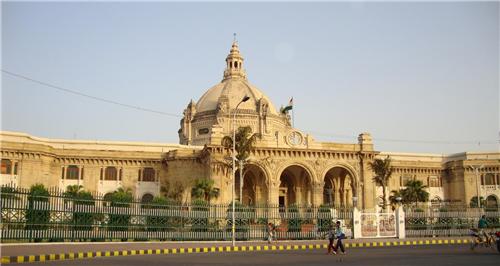 As mentioned Vidhan Sabha is an integral part for every state and for Lucknow it has more importance not only in terms of political rights but in terms of artistic creation which is evident in the picturesque building named as Vidhan Sabha Bhawan or Council House. One of the main attractions of the city is the amazing architectural brilliance of this building which was constructed during the time of British in 1922. It was at that time when the decision was taken to shift the capital Lucknow from Allahabad. The layout or the blueprint of Vidhan Sabha was prepared by Sardar Hira Singh and Zecob. The construction of the building was looked after and monitored by Sir Harcourt Butler and Raja Sahib Mahmudabad.

This was not an easy construction and it took enough number of labours and 6-year-period to complete the construction. It was in 1928, the construction got completed and estimated cost of this construction was 18 lakh rupees. The use of Mirzapur sandstone and influence of the famous Gothic culture makes it a distinctively beautiful creation. The octagonal shape of the dome and the design of the national bird peacock and the artistic splendor make the building among the finest creations present in Lucknow city. The elaborate lush green lawn adds elegance to the overall view of the building.

Situated at Vidhan Sabha Marg which is in close proximity to Hazratganj and GPO building, this area remains absolutely crowded for the number of administrative offices present here. But this is not a restricted area and tourists have the permission to explore the place as well as the grand creation. Often foreigners visit Lucknow from different parts of the world and they come here to witness the best architecture. The scenic beauty of the surrounding in contrast to creatively beautiful Council House is an unmatched attraction of the city. For all the travelers visiting Lucknow, this is a must see destination.