In the list of several Imambaras in Lucknow, Sibtainabad ka Imambara is also a known tourist’s attraction. It was constructed in 1847 by the Nawab of Awadh called Wajid Ali Shah for things like calling Majlis (meeting) for the mourn sessions of the martyrdom of Imam Hussain and the very term Imambara means mourning. This Imambara is located in the heart of the city of Lucknow in the area called Hazratganj. It carries the tomb of the King of Awadh known as Amjad Ali Shah and his grandsons Mirza Javed Ali and Taj-un Nisa Begum (wife of Nawab Wajid Ali Shah). This is the reason why this Imambara is also denoted as maqbara as it carried the mortal remains of the Nawab Amjad Ali Shah. It is also an important place for the known activity of Muharram called ‘Aag Ka Maatam’. 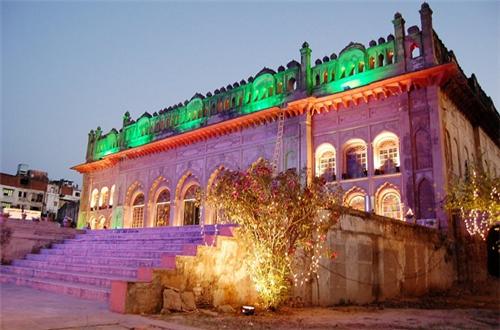 This Imambara was built by Nawab Wajid Ali Shah the moment he acceded his throne in 1874. The Sibtainabad ka Imambara was constructed at the very same place wherein there was a Chavni (Cantonment) of Mendu Khan. The cantonment carried an inn in this premises. During the first freedom struggle movement the boundaries of this Imambara was destroyed by the Sikh regiment of British Army when they were seen marching to Qaiserbagh in order to attack Begum Hazrat Mahal and her supporters. During the regime of British, this building was also used like a Church but was later in the year 1919 was considered in the list of heritage monuments found in the Lucknow city.

If you look at the Sibtainabad ka Imambara, it will be seen standing tall amidst the areas of Hazratganj and appear very much majestic to the people moving around it. This Imambara was constructed in an Indo-Islamic design. It carried two different entry points including the one that opens in the main area of Harzratganj market and the second passes via the main complex at the front side. Once you enter inside this Imambara via the gateway you would come across a mosque that stands high over the right side of the rectangular complex. The hall inside the Imambara is simply gorgeous carrying the arch ways and the wall of this monument that has the epic patterns being designed over the same. Currently, the structure of Sibtainabad Imambara is undergoing a renovation work thanks to the incredible efforts of Archeological Survey of India (ASI). In other words, Sibtainabad Imambara can be termed as the other important architectural splendor of Lucknow city, which incorporates a large garden wherein the duo singers - Herry Webb and Cliff Richards took pleasure sitting around and enjoyed singing taking pride being based at this place.

As it is situated in the heart of the Hazratganj, it is effectively connected to the market area of this famous place in Lucknow. You can therefore access a number of traditional food and cuisines along with other things. The other tourist’s places close to Sibtainabad ka Imambara include Bara Imambara, Kaisarbagh Palace, St. John’s Cathedral, Dilkusha Kothi Palace, etc. all these places are barely one kilometer. To reach out to this place, you can simply hire a cab or an auto rickshaw.