Located in one of the major shopping districts of Lucknow, Sahara Ganj Mall was opened with a lot of fanfare around it, being the first mall to have opened in the City of Nawabs. Apart from being inaugurated by the Chief Minister of Uttar Pradesh in 2005, Sahara Ganj Mall is also famous for being one of the largest malls in India. Spread across 525, 000 square feet, the mall houses most of the premium brands that were looking to break into the market in this prosperous city. The mall is situated in the Hazrat Ganj area of Lucknow which holds the distinction of being a Heritage Market having been in existence for over 200 years now. An amalgamation of the old and the new, Saharaganj Mall is an epitome of stylish architecture and a comfortable and relaxed environment to shop. 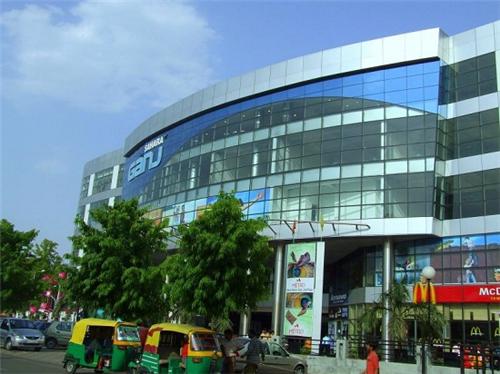 It is accessible by cabs and other local transportation making best use of its location, in the heart of an age-old marketplace, to provide its patrons with ease of access. It also boasts of a large underground parking lot with convenient facilities for patrons who would prefer to travel in their personal vehicles. In the mammoth 5-storey building, the mall houses many premium to luxury stores like Reebok, Guess, Lee Cooper, Pepe and Rado as well as smaller boutiques offering a very wide range of products. It also houses superstores like Big Bazaar and Pantaloons both owned by the Future Group catering to the daily food, lifestyle and fashion needs of the Indian middle class society.

The top floor of the mall boasts of a massive food court. In the city of the Nawabs and Kebabs, the Sahara Ganj Mall food court offers enough variety to cater to people with varying tastes in food ranging from McDonalds and KFC to the local cuisine of Lucknow offered in specialty restaurants like Tunday Kababi. The mall also boasts of popular coffee house chains like Barista for patrons to relax and unwind after a long day of shopping. The PVR Theater located inside the mall reinforces its popularity with patrons by offering a state-of-the-art comfortable movie viewing experience and a play area for children to ensure their entertainment as well. 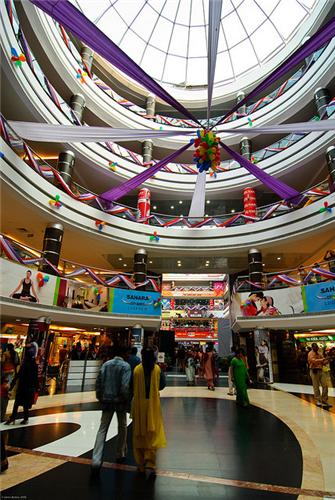 Sahara Ganj Mall is located in Hazratganj area earlier known as Queens Way and only open to British carriages and is surrounded by many tourist attractions like the Hanuman Temple and the Imambaras. With shops in narrow winding lanes resembling something straight out of the Victorian Era, the opening of the Saharaganj Mall offered the city of Lucknow a major lifestyle change. A major beautification drive recently undertaken in this area has only worked to enhance the appeal of its surroundings.

Apart from being a retail megastore, Saharaganj Mall has been awarded the ‘Best Mall’ award by the Government of Uttar Pradesh for catering to the needs of the disabled by providing them with special pathways and elevators for them to shop at their own ease. This has been broadcasted and applauded by national television news channels like CNBC as well.

Saharaganj Mall is self-sufficient and offers specifications and a class of the highest order. It has aimed to raise the bar for current and upcoming malls in the country by raising shopping and entertainment experiences to international standards by offering unparalleled quality, design and services.

Explore more about Shopping in Lucknow