Paan is a common palate cleanser in India. Prepared with a combination of betel leaf, slaked lime paste, areca nuts, and some other spicy ingredients, Paan, is an extremely favoured leaf. Though it is prevalent in almost parts of India, yet its presence is mostly felt in the northern part of India and Lucknow. Paan is also used as a token of greetings in many communities. For years, it is being a traditional affair to offer Paan in any religious or social events. Be it a marriage ceremony, a thread ceremony or rice-ceremony, or any cultural events, dawats or dinners, Paan is served at each one of them. Paan is also offered to the visitors and guests as a gesture of hospitality at the beginning of many social functions 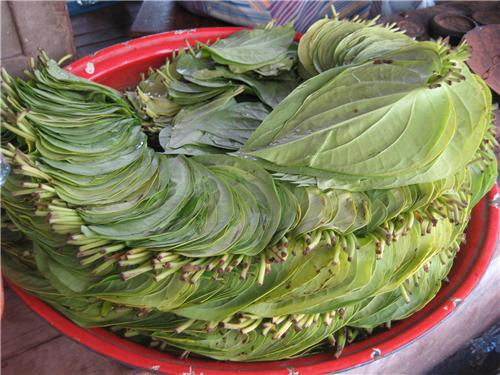 Paan chewing is extremely popular in Lucknow and the custom is widespread since the Nawab’s era. It is a renowned cultural norm in this city and is often considered a part of the cuisine. Besides its significance as a part of the Lucknow food, Paan chewing is also an addiction or an obsession in Lucknow. People once addicted to it cannot restrict themselves from having it several times a day.
If you are visiting Lucknow, you can spot a number of Paan vendors on the streets. You will find no street, mohallas or crossings without the hanging stalls, wheeled shops or gumtis. All of them are stacked with designed and decorated flavoured betel leaves in sophisticated boxes and bottles. The Paan walas are not merely the paan vendors, their stalls are also one-stop meeting places for the families and friends in Lucknow.

Paan, apart from possessing a customary value, also has tremendous medicinal benefits. In fact, betel plant is itself a medicinal plant. This is commonly used in the preparation of local medicines. Fresh raw Paan leaves are a natural antiseptic, stimulant and also breath-freshener. This popular scented leaf is chewed also for digestive purposes.

History of Paan in Lucknow

The history of Paan chewing can be traced back to 5000 years ago in India. The Ayurveda Scholars had invented this betel leaf with the help of Dhanvantari by taking the experiment on rats. The mention of this amazing flavoured leaf can also be found in ‘Gita’ where Lord Krishna used to chew Paan. In India, chewing Paan, became popular after the mother of Shehjahan, Noor Jehan, took interest in it.
Paan is also famous among Indian women for its natural red colour that applies to the lips. This was used as an alternative to the lipstick. 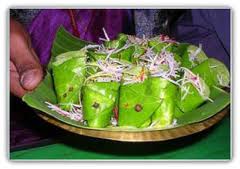 The leaves, which are originally dark-greenish in colour, are of various types and are grown mainly in parts of Indian and Bangladesh. The Paans made from small and brittle leaves from South India are commonly known as Chigrlayele. On the other hand, Bengal is mostly famous for the deliciously flavoured Paan, known as Desi Mahoba. Jagannanth and Maghai are the familiar names of the Paan in Benaras. Kariyele and Ambadi are the types which are mostly taken with tobacco.

The skilled Paan makers in northen India and Lucknow are known as Paan walas. It takes immense practice to design and prepare the Paan to its best. Lucknow is famous for its expertise in Paan making. The famous Paans in Lucknow are Pistai Paan, Jafrani Paan, Badami Paan, Khatta Meetha Paan, Palangtor paan, Paid ke Paan, Avale ka Paan, and many others. If you are visiting Lucknow, then you must not miss out on this strong aromatic leaf.

The leaves are dressed up with varying ingredients that render a unique taste to each one of them. They are decorated in such amazing ways that you will find it hard to resist your temptation.

In Lucknow the betel leaves are stored inside metal boxes or wrapped in moist cotton cloth, which is popularly known as Paan Daan. This box comprises of multiple compartments with lids, to store different ingredients separately.

When you order for a Paan, the Paan wala removes a leaf from the box, and applies the Kattha and lime paste generously on the inner side of the leaf. This is further topped with small bits of Areca nuts, saffron, cardamom, tobacco, cloves, tiny coconut pieces, sweet chutney and peppermint. These spices, however, are applied according to the customers’ preferences. The Paan is then folded in a triangular shape, commonly known as gilouri. The gilouri is further wrapped in silver cover in order to enhance its look to the customers. If you visit Lucknow even once, then do not ignore this special taste. You will surely love it. 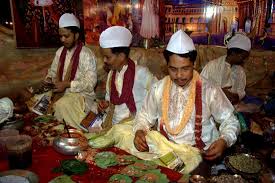 If you are indeed planning to taste a delicious Paan in Lucknow, then there are few Paan shops that you must definitely stop by.