The Nawabs of Lucknow ruled the kingdom of Awadh from 1732 to 1856. They were descended from a Persian adventurer, Saadat Ali Khan, who was in the service of Mughals. He was made governor of Awadh in 1732. Saadat Khan was soon given the title of nawab and in time began to exercise independence from Delhi. With the dissolution of the Mughal Empire in the 1750s, Awadh came into prominence. In 1755, the capital was shifted from Faizabad to Lucknow setting the stage for the city’s golden era. Lucknow expanded exponentially and was studded with many monuments that the nawabs built to showcase their power and wealth. 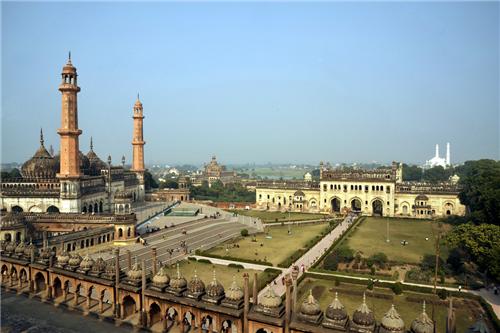 All the city’s main monuments – the Bara Imambara, Chhota Imambara, Shah Najaf Imambara, Chattar Manzil and Qaiserbagh Palace - were built in this period. Lucknow was laid out as a spacious and beautiful city with its bustling neighbourhoods of Chowk, Aminabad, Wazirganj, Qaiserbagh, Husainabad and Hazratganj with many gardens in the Mughal style, in between them. The Bara Imambara, built by Asaf-ud-Daulah, was and remains the crowning glory of Lucknow. Qaiserbagh Palace, built by the last nawab, Wajid Ali Shah, epitomised the last flowering of the beauty and opulence of the nawabi way of life. Unfortunately, most of it was destroyed by the British in 1857 and only the Safed Baradari remains of what once was a magnificent complex.

Son of Shuja-ud-Daulah, it was Asaf-ud-Daulah who shifted the capital of Awadh from Faizabad to Lucknow in 1775. He is considered the architect of Lucknow and is best known for building the Bara Imambara and is buried within it. Though not known for his military acumen, administrative skill or learning, he left his mark on the history of Lucknow with the Bara Imambara which was a famine rehabilitation project. Asaf-ud-Daulah was considered to be generous in nature. He ruled from 1775 to 1797.

The second son of Shuja-ud-Daulah, Yamin-ud-Daulah succeeded to the throne in 1798 after the death of his half nephew, Wazir Ali Khan. He built Dilkhusha Kothi in addition to many other buildings in Qaiserbagh. By the end of his reign in 1814, he was much depleted in both power and territory by the British.

Ascending the throne in 1814, Ghazi-ud-din Haider was the third son of Yamin-ud-Daulah. He built the Chattar Manzil and extended the Moti Mahal. He also built the Shah Najaf Imambara where he is buried. He is also known for establishing a litho printing press and printing the Haft Qulzum, a Persian dictionary. It was during the reign of Ghazi-ud-din Haider that Lucknow became an independent kingdom in 1818 and adopted the symbol of two fish facing each other.

He succeeded his father Ghazi-ud-din Haider to the throne in 1827. He is best known for setting up an observatory in Lucknow which was equipped with the latest instruments. He died without any sons of his own and was succeeded by his uncle Muhammad Ali Shah, who was helped by the British to ascend to the throne.

Having been helped by the British to come to power, Muhammad Ali Shah found his power circumscribed to a great extent by them. However, he recognized the decline that had set in the administration of the kingdom and set about doing what he could to improve matters. Muhammad Ali Shah built the Chhota Imambara, Husainabad Baradari and the Satkhanda. The Jama Masjid was also begun by him but finished after his death. He ruled from 1837 to 1842.

He succeeded his father Muhammad Ali Shah in 1842 and ruled till 1847. Amjad Ali Shah was a devout Muslim and almost absent from day to administration and military affairs. He is remembered for building Hazratganj, the bridge over the Gomti, Aminabad bazaar and the first metalled road to Kanpur. Amjad Ali Shah is buried in his own mausoleum, the Sibtainabad Imambara. He was succeeded by his son Wajid Ali Shah.

Remembered by history as the last Nawab of Awadh before its annexation by the British, Wajid Ali Shah succeeded to the throne in 1847. The British by this time were playing a central role in the administration of the kingdom. Wajid Ali Shah was a patron of the arts and a poet and dancer himself. The magnificent Qaiserbagh Palace was his creation. Though he was initially interested in administration, he gradually allowed himself to be taken over by less taxing pleasures, ceding more and more power to the British. Finally, the British took over Awadh in 1856, one of the chief causes for the Rebellion of 1857. Wajid Ali Shah was exiled to Kolkatta where he remained till he died in 1887.

After Wajid Ali Shah was exiled to Kolkatta, his wife, Begum Hazrat Mahal, resisted the takeover of the kingdom by the British. She seized control of Lucknow briefly during the Rebellion of 1857 and arranged for her son to ascend to the throne. After the British regained control of Lucknow she fled to Nepal where she died in 1879. Begum Hazrat Mahal Park in Lucknow was established in her honour in 1962 and a commemorative stamp was issued in 1984.