Situated on the southern part of Gomti River, the Residency was constructed for the British residents in 1775. Stretching over an area of thirty three acres of land along the river side this is an exclusive property with a range of houses, where though the northern side building was referred as Residency earlier, but after the battle of 1857, all the houses were together termed as The Residency. 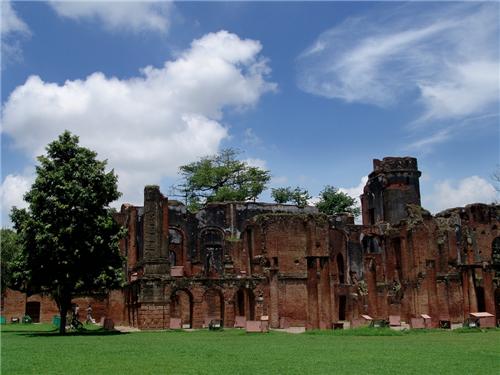 It all began in 1774 AD when Nawab Shuja-ud-daulah first agreed on the proposal of keeping a British resident stationed in Awadh. It was exactly the next year that the construction of a new building for the British resident started as per orders of Nawab. The building was named as The Residency. This was built for both the British officers and their staff. Though started in 1775 AD, the building got completed in 1800 AD under the supervision of Nawab Saadat Ali Khan. It must be noted that the original site belonged to the Sheikhzadas but the Nawabs acquired the land and built several more buildings and added it to ‘The Residency’ as per requirement.

The Residency after completion included bungalows, Muslim shrines, thatched houses, and ‘high end’ buildings for higher officials. The area was well constructed and the mixture of style clearly portrays the expert architectural mind. However, this did not last long and the Residency was attacked by freedom fighters in 1857 which was often termed as the Lucknow siege. This attack went on for 87 days and this was an unparallel freedom struggle in the History of the country. Extensive damage resulted on the Residency after this attack. Ruins were evident on the doors, windows, roofs and pavilions of buildings with large holes on the walls which completely destroyed the beauty of the place. Though General Campbell after a prolonged fight was able to stop the freedom fighters but by that time the ruins of The Residency was too high.

The first attraction comes as soon as one enters the Residency which is the Bailey Guard Gate. This Gate has special emphasis since it was made by Nawab Sadat Ali Khan to welcome and show respect towards John Bailey, the Resident of Lucknow toward beginning of nineteenth century. After this comes the treasure house on the right side. This was completed in 1851 and ruined in the 1857 battle when the central part was used as an ordinance factory. Dr Fayers House comes on the left who was the Resident Surgeon in the Residency.

Then there is the Banquet Hall which was a double-storied building with impressive architecture and on the left of it Imambara Mosque. Then there is Begum Kothi which belonged to Vilayati Mahal Makhdarah Aliya - the queen of Nasiruddin Haider. The Memorial Museum of 1857 comes right after, which has distinctive things of the yester years. Last but not the least is main building, ‘The Residency’. The central building was constructed too well in the pattern of European villas with central halls, side rooms, spacious balconies, flat roof, high pillars, wooden beams and stucco ornamentation work in the interior and outside. This was an excellent construction which however now turned into absolute ruins.

The place has now turned into a shattering reality of damage, carcass and wreck. Though there are remains of few parts of construction like school, post office, jail, houses and banquet hall, they fail to exhibit the real excellence of construction in the Residency. Today it holds the memories of yester years in its ruins, shells and British guns, torn flags and belongings which speak out of the terrible war that took place in this area. The Archeological Survey of India considers this entire complex of national importance and thus takes care to preserve all the left over assets. The gardens along the Residency have been well maintained with proper restoration of the buildings which have turned the place into a good visiting historical destination for many tourists round the year. For sightseeing along with the museum which holds the asset of yester years and a dungeon with 44 stairs there is also a cemetery near St Mary’s church where more than 2,000 defenders were killed and buried. The remaining portions of the buildings are equally interesting for the visitors.

Landmark: Near Shaheed Smarak, half kilometer from Hazratganj on MG Road
Best time to visit: Any time but November to February are congenial.
Open on: Tuesday to Sunday (Monday Closed)
Timings: 10am to 5pm
Entry Ticket : Rs.5/- only
Parking Facility: Present