MPs and MLAs from Lucknow

Lucknow is represented in Lok Sabha by one MP and, in the past, has been represented by such eminent politicians as Atal Behari Vajpayee (1991- 2009). The first MP from the city was Shivrajavati Nehru (1951-57) from the Congress. Lucknow has also been represented by MPs from the Janata Dal, Janata Party and an independent. Voter turnout in Lucknow has usually been low, often less than 50 per cent. Other personalities who have stood from Lucknow include Dr. Karan Singh, Raj Babbar and Ram Jethmalani. 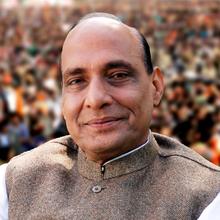 Rajnath Singh (BJP): Raj Nath Singh, the BJP president, won the seat from Lucknow with nearly 2.72 lakh votes. He registered his victory for the state capital by 561106 votes. Rajnath Singh has been also appointed as the Union Minister of Home Affairs. He has also served as the Chief Minister of Uttar Pradesh in 2000. Rajnath Singh joined politics in 1974. He was the BJP Youth Wing's State president in 1984. Earlier in 2009, he was elected as member of Parliament from Ghaziabad in Uttar Pradesh.

Dr. Rita Bahuguna Joshi (Congress): Elected from Lucknow Cantonment in 2012, Rita Bahuguna Joshi has been active in politics since 1995 when she was mayor of Allahabad. Once a professor of history at Allahabad University, she is the daughter of former chief minister, Hemvati Nandan Bahuguna and is the current president of the Uttar Pradesh Congress Committee. She has also been involved in many women’s movements at the grassroots.

Abhishek Mishra (Samajwadi Party): Elected from Lucknow North in 2012, Abhishek Mishra is not a run-of-the-mill MLA. A former IIM Ahmedabad professor, he has degrees from Cambridge University and the Massachusetts Institute of Technology and used to teach strategy and innovation. He is Minister of State for Protocol and he often represents the state at the Centre.

Mohammed Rehan Naim (Samajwadi Party): Elected from Lucknow West in 2012, Mohammed Rehan Naim is owner of Drosia budget hotels in Mumbai and Dubai. A first-time politician, his focus is on improving the quality of infrastructure in Lucknow and making rainwater harvesting compulsory. He is an MBA from Aligarh Muslim University.

Gomti Yadav (Samajwadi Part): Elected from Lucknow Bakshi ka Talab in 2012, Gomti Yadav has been in politics since he was a corporator. He was formerly with the BJP.