Giving a cold shoulder to the spine-chilling winters and patchy dense morning fogs; the residents of Lucknow gear up to celebrate the three most-happening months of the year. The entire city as well as expats eagerly waits for the arrival of November-December-January, where they witness a host of exciting events and festivals that adds a spark of life to otherwise gloomy, lifeless winters.

Just after the vibrant Lucknow Mahotsav comes to a closure, the city gets ready to roll for the next thrilling event – Lucknow Half Marathon. Sports enthusiasts from all across the country gather in Lucknow to participate in the event. 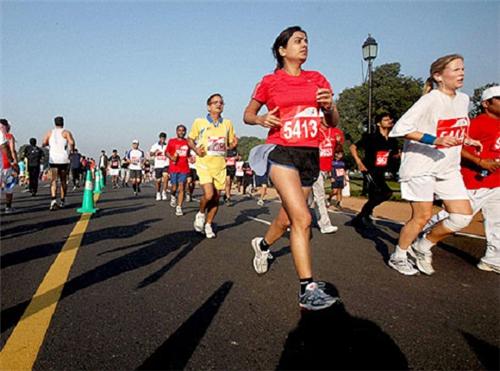 Inception of Lucknow Half Marathon

Lucknow Half Marathon is an initiative started by UP Sainik School Old Boy’s Association (UPSAINIAN Trust). The first marathon in Lucknow was organised in December 20, 2009. The event is applauded for its motive and cause. Lucknow Half Marathon pays tribute to the martyrs and infuses “Prerna” (inspiration) to serve our country with utmost devotion and love, for the future generation. UPSAINIAN TRUST, the organizer of event, is respected for their contribution in protecting and defending our country and their various philanthropic activities for the progress of civil society. Every year the response has been immense and it is mostly the reputation of UPSAINIAN that draws a large number of people to participate in the marathon.

Lucknow Half Marathon is affiliated to the UP Athletics Association. In the initial years, Lucknow Half Marathon was flagged off by Army Commander. Lately, the Chief Minister of Uttar Pradesh flags off the event. Every detailed measure is taken care of during the event. The army actively participates to make the event a grand success. The entire route of the marathon is decided and managed by the army, traffic police and private security guards.

Proper care is taken to handle any form emergency situation. Route patrol vehicle, water, ambulance, toilet points, medical facilities are aptly provided at several points in the route. Several noted celebrities like cricketer Manoj Tiwari, model and actor Milind Suman as well as Senior Defence Officers have participated in the event. The winners of the first Lucknow Half marathon in men’s category were Arvind Yadav and Sukanya Mal among women.

Categories of Lucknow Half Marathon

Half marathon refers to the distance that is half of a marathon. The covered distance is 21.0975 km or 13.1094mi on roads.In Lucknow Half Marathon there are three categories of marathon:

Prizes for winners of Lucknow Half Marathon

Every year the event has received immense support and encouragement from all sections of print, television, radio and new media. Participants of the event include common man, school students, athletes, corporate houses, armed forces and various military forces.  Apart from marathon, the event also witnesses other activities such as martial arts display, band performances, motor cycling, yoga by kids and para biking. The event comes to a closure with a formal cocktail and dinner party attended by the Alumuni of UP Sainik School.