Localities and Areas in Lucknow

Lucknow is the capital city of Uttar Pradesh. It is located 123 meters above sea level and extends along the banks of river Gomti. The city is well known for its rich cultural heritage which is inherited from the Nawabs who ruled the place in the 18th century. It has many architectural wonders which were built mostly in the 18th century. Lucknow was a centre for Urdu poetry and many art forms including Kathak, drama, etc. Later, the place was of great interest for the British rulers as well and it was the administrative centre of the British Empire. The city could beautifully carryover the splendid past and blends it with its present. The cuisine of Lucknow popularly known as Awadhi cuisine is also world famous. 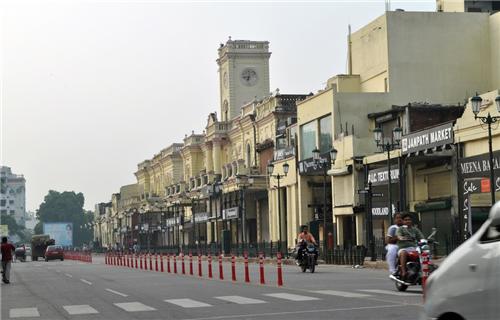 Built by Amjad Ali Shah, Hazratganj was earlier open only for British and was called the Queens Way before Independence. Hazratganj area now adorned with benches, bright lamp and fountains looks like a Victorian-era walkway. In addition to the local markets, there are various shopping complexes, restaurants, hotels, theaters and offices in this area. The place is also famous for jewellery stones and antiques. The shops in Hazratganj sell the world famous Chikan material. There are many handicraft sellers located in and around this place. Retail showrooms of all major consumer goods manufacturers can be found in this area. Hazratganj crossing is the busiest crossing in Lucknow city. Hazarganj is the location to many famous schools and colleges in Lucknow. There is a popular coffee house in this area which came into existence between 1914-18 and has hosted many political and cultural figures from time to time. A famous Hanuman temple is located in Hazratganj.

Aminabad is an old part of Lucknow. The Aminabad market was in operation since the time of Nawabs. Fashion products, ornaments, jewellery, chikan dress materials, footwears, etc are sold here and it is open till late in the evenings. Most of the items are locally produced. Thursday’s footpath market is famous. There are restaurants, bakeries, and Paan shops which sell the best of the Kababs, Biryanis and other famous food items of Lucknow.

Indira Nagar was developed by the UP housing board. It is a posh residential area which is divided into four blocks and subdivided into several sectors. The main market in this area is Bhootnath, however there are several markets and market complexes in this place. It has several banks, schools, colleges, hospitals, restaurants and hotels, government offices, construction material shops, etc. Indira Nagar also has several multinational eating joints. There are many jogging parks and gardens in this area. Indira Nagar is well connected with auto rickshaws and manual rickshaws.

Gomti Nagar is developed by Lucknow Development Authority. It has both residential and business settlements. It is one of the fastest growing areas in Lucknow. Gomti Nagar is divided into phase I, phase II and Gomti Nagar extension. Gomti Nagar extension is under-construction, whereas both phase I and II have good occupancy rates. The whole of Gomti Nagar is divided into sectors known as ‘Khands’, all starts with the letter V. There are 23 Khands. It has many premium residential projects, universities, malls, IT parks, shopping complexes, multiplexes and financial institutions. It is a major commercial and IT hub of Lucknow. Many important government offices like RBI, CRPF, Customs division, ICAI, ICWAI, BSNL, etc are situated in this place. It has many parks and gardens as well. Many international food chains have their outlets in Gomti Nagar. Marine Drive, located in the banks of river Gomti gives a perfect beautiful evening. The place is very well and easily connected to the railway station in Charbagh and airport in Amausi as well. The magnificent architecture, well maintained roads and other utilities has made Gomti Nagar a favorite residential spot for the upper middle class.

Alambagh is one of the major shopping avenues and eating points of Lucknow. Alambagh market is situated in the Lucknow-Kanpur highway. It is the most developed and fastest growing market in the city. Alambagh has grand showrooms and one can get anything from branded items to locally produced items. Vegetables, fruits, ornaments, jewellery, sweets and other products are available. The market is situated around three kilometers from Charbagh railway station. The history of Alambagh begins with the construction of the Alambagh gardens and it was an important place during the Independence war. There are many Pakistani families in Alambagh who took refuge during the Independence struggle. Temples and gardens are other attractions in Alambagh.

Aliganj is one of the prominent residential areas in Lucknow. It is a planned colony with excellent infrastructure. It is very well connected by road with the rest of the city and has educational institutions, banks, schools, universities, shopping malls, museum, markets, etc.

Jankipuram is a township with all basic amenities. The place is known for its neat, clean and safe location. The traffic is less when compared to the busy places in Lucknow. There is more greenery in this place which provides a healthy environment. Jankipuram park is well maintained and is ideal for morning and evening walks. This is considered to be a perfect place to live in Lucknow with all basic utilities and good connectivity to other major places.