Kite flying is a traditional sport which is very popular in Lucknow. On such festivals as Makar Sankranti held in January, Basant Panchami held in February and Jamghat held in November the day after Diwali, the city is awash with hundreds of colourful kites vying for attention and supremacy over each other. The kites are of different shapes; birds, animals, insects, amphibians and objects, all carefully handcrafted with attention to detail. Some might even have images of the people’s favourite cricketers on them. Kite flying also takes place during the Lucknow Mahotsav. With people of all communities taking part in kite flying, it has become a symbol of communal harmony in the city. 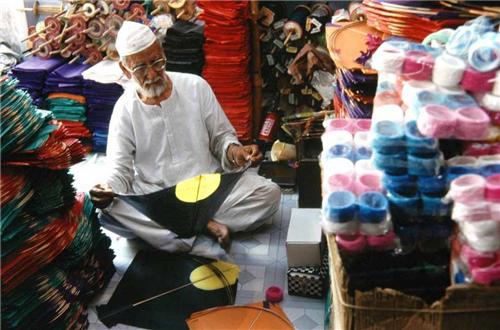 At this time of the year, the lanes in the old city’s neighbourhoods of Chowk, Aminabad and Hazratganj, are full of shops selling kites ranging from Rs.5 onwards. Kankawwa is the Lucknow style of kite which was perfected during the days of the nawabs. It is quite heavy and is in the shape of a bird’s wing and tests the skills of the kite flyer. Kites for the nawabs were quite magnificent, trimmed with gold and silver.

During the season, betting also takes place between competing teams who may challenge each other over a period of time. Patang bazi is the art of ‘kite fighting’ in which one kite cuts off the string of other kites as quickly as possible. Expert kite fliers earn such titles as patangbaz and nausherwaz. It has a strong tradition in Lucknow and gives kite flying a sense of competition. Fighter kites are usually smaller in size, made of thin paper and diamond shaped, for greater manoeuverability.

The different types of kites include patang – the common kite, guddi – a tall kite with a small tail, dedh kanni - a broad kite and tukkal –a heavy kite. The common kite is very simply made. It consists of a sheet of tissue paper with a bamboo spine and bow. The tail could be a long piece of paper, a triangular piece or a kite could be tail less. While fighter kites are simple in construction, show piece kites are more elaborate with many designs and colours.

No kite flier worth his salt neglects buying good quality thread to fly the kite with. While sadda is plain cotton thread, manja is cotton thread coated with powdered glass to enable it to cut other kites. Making manja is a skill which is passed down generations. So popular is the sport that various kite flying stories have become part of popular culture. In reality, unfortunate accidents also take place since most kite flying id don on the city’s roof tops. Animals and birds are also harmed by manja left lying round after the kite flying is over.

A wooden spool for the manja completes the picture. It is created with splits of bamboo with two wooden discs at both ends and with protruding sticks to hold it. It is quickly rotated with both hands to let the kite fly.