Lucknow, the capital of the Indian state Uttar Pradesh, is situated on the banks of the famous river Gomti. Its history dates back to times immemorial. It served as the capital to the Nawabs of Awadh and due to this reason, it has earned its name, City of Nawabs. The courteous culture and the mouth watering delicacies reminiscent to Lucknow have been learned from the Nawabs. Although, it has witnessed amazing modernization, it has still retained its age-old glory and charm. The city is also known for its music, literature, arts and crafts and dance. It is a well known fact that famous musical instruments Tabla and Sitar were born in the streets of this famous city. 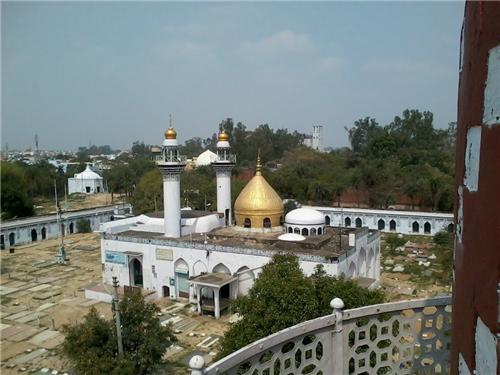 The Muslim communities in Lucknow celebrate the Azadaari procession, a mourning that is held on the tenth day of Muharram in the remembrance of the emperor and 72 others who were killed in the battle. On the tenth day of Muharram called as Aashura, Lucknow witnesses a group of men, women and the children, wear black dresses and go in a procession to Karbala, venue in TaalKatora near AishBagh in Lucknow, to bury their taazia. This Karbala was constructed by Meir KhudaBakhsh. For these two days, anjumans assemble here, who come with alam, which is known to be the replica of Husain’s army. They beat their chest, to mourn the death of the Imam Husain and 72 of his followers.

The battle of Karbala took place on the tenth day of Muharram according to the Islamic calendar, at Karbala, which is presently called as Iraq. The battle took place between a small group of supporters and the family members of Husain Ali and a much larger military group of Yazid. In the battle, Husain was killed including his 6 months old infant child and 72 other followers. Also, many women and children were imprisoned. Husain and all his followers were intercepted by a huge group of army from Yazid. The battle took place to secure the position of the Umayyad dynasty. This event is marked as the event that separated Sunni Muslims and the Shi’a Islam. Battle of Karbala is now mourned as the death of Husain, and the day is called Ashurah. This occasion is represented as a battle between the evil and the good, light and the darkness, with evil winning in the battle. Yazid becomes the evil here. This battle marked a historic moment in the Islam.

This battle has been described as the indescribably tragic incident in the history of Islam. According to Shias except the one Imam, the rest of the others were martyred in the battle. This is subsequently represented as the Karbala Paradigm.

There were two other Karbalas before - the Karbala of Mir KhudaBakhsh was constructed in the city of Lucknow. One was built by Khwajasara Ali Khan, a Nawab and the other was by Hajji Masita during the rule of Nawabs. Both the Karbala’s do not exist today, while the remains of the latter can be seen next to the TaalKatora Karbala.

Mir KhudaBakhsh a close friend of Muatamad Daulah Agha, Awadh’s Prime Minister, had to face problems to bury his infant daughter. This is when he decided to make a Karbala of his own, which was helpful even for the common people during the burial time. For this, he bought 30 bigha land and started constructing Karbala in 1817. The process of construction was completed within a span of 6 months, with Sadiq Ali’s supervision.

A Persian Chronogram is fixed on the west side of the Karbala, which has the name of the ruler of the city along with the name of the builder Mir Khuda. The upper part of the Karbala resembles the Rauza of Imam at Karbala, in Iraq. The surface with the arched compartments along the gateways on all the 4 sides serves as the burial ground or a graveyard. Inspired by the quaranic verses, the same calligraphic styles have been scripted all over the walls on inner side.

The three-arched gateway of Rajajipuram main road is the main entrance to the Karbala. This has also got beautiful Quaranic calligraphic designs and floral designs on the wall.

Back then, every Nawab would have his own Karbala, where his family members were buried. However after a great issue, the British made it a rule for the people to bury the taazia at the Karbala TaalKatora, and this is how this particular Karbala has gained so much popularity and importance. Till 1907 both Sunni and Shia Muslims buried the taazia in this same Karbala. Once after the problems between the both Muslim communities in the year 1907, the latter began burying the taazia at Badshahnagar Karbala.