Jama means a huge congregation and hence Jama Masjid is self explanatory. In Muslim society Masjid has an integral place, which is basically a place of worship for Muslim devotees for five times in a day. Invariably every city or town, which has a sizeable amount of Muslim population, is bound to have a mosque called Jama Masjid, which is big enough to encompass good amount of people in it. As Muslims in India ruled for around 700 years, you can therefore find such mosques in various cities, which of course include Lucknow. The Jama Masjid of Lucknow was built in 1843 by Muslim ruler called Sultan Ahmed Shah, which was constructed using yellow sandstone popular for rich and intricate kind of design and architecture. Owing to its unique and incredible design, Jama Masjid Lucknow stands top in the list of beautiful and mighty mosques in India. 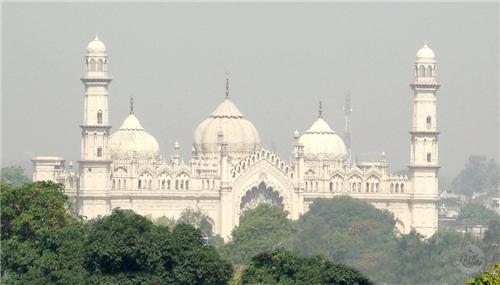 The Jama Masjid in Lucknow is an integral place of worship for the Muslim community based in Lucknow, who is seen collecting in huge numbers especially during the auspicious or festive events. During the month of Ramzan, you can experience some of the best flora and fauna. It is located in the heart of the Lucknow city near the popular place called Munshi Pulia Chauraha in Indira Nagar. It is also called as Jami Masjid in Lucknow.

Jama Masjid Lucknow is considered as a replica of the one built in New Delhi and was constructed with an intention of exceeding its size and grandeur. Though in some ways it has surpassed these elements but has its own uniqueness as well. This Mosque has a special connectivity with history. During the advent of the Freedom Struggle in 1857, it was forced to be vacated by the British East India Company and people dwelling around this Mosque had to leave this place to secure their lives. However, looking back there was a controversy, which stopped people to pray in 1842. A prominent priest Syed Dildar Ali Naqvi of Naseerabad was called to lead the prayer of Friday Prayers, however, he denied participating owing to some payment issue, which was seen between the owner of certain portion of the land where the mosque was built. Later the king regretted the issue and resolved the same amicably to the satisfaction of both the parties (the king and landowner). Finally the first congregation was witnessed of a Friday prayer that was held in Lucknow Jama Masjid in 1842. 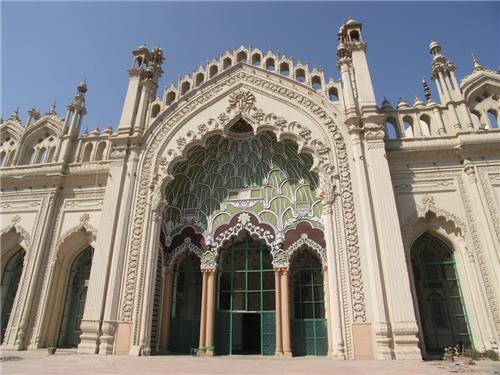 The structure of this Mosque is a blend of both Muslim and Hindu architecture and the entire structure of Jama Masjid stands straight over 260 pillars, which also supports 15-arched domes that are seen at various elevations. The domes over the mosque are beautifully designed and decorated and can be termed as one of the incredible architectural splendour. All the 260 pillars are seen with carvings, which has the tinge of Jain and Hindu culture. The courtyard of the mosque is a huge area comprising 75 by 66 meters whereas the western chambers comprises of a hall (the area of prayers), which is supported by 260 pillars. Over the eastern side (entrance), you would find the tomb of Sultan Ahmed Shah, which is preserved till date by the concerned authority. As you take a stroll inside the mosque, you would certainly call it as a perfect architectural wonder in different sense.

The central archway leads to two prayer halls of Jama Masjid, which is a replica of western side of the Rumi Darwaza. It is a blend of double cusped arches and intersecting arch weaving, which is seen forming a honeycomb pattern over the squinch. The high pillars and ceilings seen inside the prayer halls are decorated with flowers and foliage. The prayer niche called as Mehraab, which faces at the western showcases Quranic couplets’ calligraphic inscriptions backed by the decorative stucco work. The staircase found over the south eastern side of the first hall simply leads over the roof top from where the visitors can easily get the view of stucco patterns seen over the larger domes and balustrades of this mosque. The staircase inside the minarets takes you over the stone based umbrella installed over the top. If you manage to reach at the top (at the minarets) you can easily get the bird eye view of the surrounding area of Hussainabad. The space of Pesh Imam (one who leads the prayers) is found over the hollow area of the floor. This makes him stand at the same level of his followers during the mass or congregation. Lastly, talking about the boundary, the Mosque was surrounded by walled boundary that carried a lofty gateway but you will not find these things as the British Army had demolished the same during the freedom struggle of 1857 by bombing this location.