Indira Gandhi Planetarium is a unique attraction of Lucknow and is situated at Suraj Kund Park, at the bank of the River Gomti. The foundation stone of this grand building was laid by Hon. Late Chief Minister of U.P Veer Bahadur Singh on 28th Feb., 1988. It has been opened to the general public from 9th May, 2003 after being inaugurated by Former UP Chief Minister Mayawati on 8th May, 2003. Various important landmarks and places of attraction such as Rumi Darwaza, Shaheed Smarak, Residency and Bara Imambara are within one km from this novel air-conditioned planetarium. 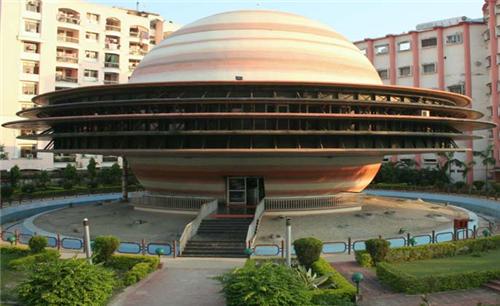 The building is a virtual wonderland of astronomy where visitors can seemingly touch the stars and other celestial objects that take years or months to see otherwise on a space journey. The Government of Uttar Pradesh set it up with the following objectives:


The planetarium has been erected with a novel shape imitating that of the planet Saturn along with five rings. The spherical building with a 21m diameter rests on a platform, which has been specifically designed to provide visitors with an idea about formation of crater on celestial bodies. A waterpool with fountains surrounds the platform. The ground floor of this building comprises of a space gallery with various charts and models of Indian satellites. The main auditorium is situated on the first floor and has a 15m diameter. Built at a cost of INR 23 crores, the planetarium has a capacity of 168 seats.

The planetarium is fully air-conditioned and boasts of a state-of-the-art projection system, which allows special effects at the time of projection. It consists of Model G-1518 with 13 panorama scenes projector along with a number of special effect projectors from Goto Optical Ltd. which is based in Japan.
Other noteworthy facilities available at this beautiful building include:

For the public in general, the planetarium remains closed on Mondays and other declared holidays every year. On normal days, its regular show timings are at 1, 2, 3, 4 and 5 p.m. In summer, an extra show is held at 6 pm. In the mornings, the shows start from 9.30 am to 12 p.m. If the number of students is 100 or more, additional shows can be organized as per the convenience of schools - at a Rs. 15 rate per student. The duration of each of these shows range from 34 to 45 minutes. For handicapped people, shows are free, although adequate proof has to be furnished.

The entry fee, or normal price for tickets, is Rs 25 per person over 3 years of age. For each student in a group of 50 or more, the concessional ticket price is Rs 15/-.