Hockey has a devoted following in Lucknow though it may not be as popular as cricket. Regular matches take place at the Dhyan Chand Hockey Stadium and at other stadiums in the city as part of various tournaments. The establishment of the Hockey India League has given a fillip to the game in Lucknow with the presence of the city’s own team, the Uttar Pradesh Wizards. Hockey is also played at the K.D. Sing Babu Stadium too. The K.D. Singh Babu Invitational Prize Money Tournament is looked forward to every year by the game’s followers.

Lucknow has give Indian hockey two famous players - K.D. Singh and Mohammed Shahid, both of whom represented India in the Olympics. 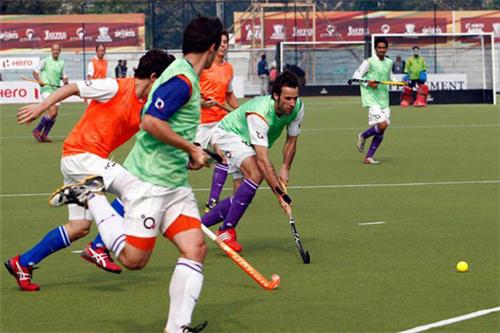 Kumar Digvijay Singh, also known as Babu, represented India at the 1948 London Olympics and the 1952 Helsinki Olympics. In 1949, out of a total of 236 goals scored by the team he scored 99 goals, the most by any team member. After retirement K.D. Singh served as coach for the Indian hockey team. Lucknow’s main stadium is named in his memory. K. D. Singh received the Helms Trophy in 1953 for being the best hockey player in the world and was awarded the Padmashri in 1958.

Mohammed Shahid made his debut for India in 1979 and represented the country in the 1980 Moscow Olympics. Known for his dribbling skills, he was awarded best forward play at the Champions Trophy in 1980. Shahid was captain of the Indian hockey team in 1985-86 and was awarded the Padmashri in 1986 for his services to Indian hockey.

Dhyan Chand Hockey Stadium, which has been refitted with an astroturf surface, is located in the Guru Gobind Singh Sports College in Lucknow. The stadium can seat 1,000 spectators. The Uttar Pradesh Wizards, part of the Hockey India League, is based here. The stadium has been named after India’s most famous hockey player, Major Dhyan Chand, who represented India from 1928 to 1948, playing a leading role in winning three Olympic gold medals. He scored a total of 400 goals in his career.

The Hockey India League, a professional league established in 2013, for promoting field hockey, has a presence in Lucknow. The franchise is called Uttar Pradesh Wizards and is owned by the Sahara India Pariwar. The highest paid player in the league, Teun de Nooijer from the Netherlands, is part of the team which consists of a total of 24 players and is based at the Dhyan Chand Stadium. The team’s players include V. R. Raghunath (captain), Tushar Khandekar, S. K. Uthappa, Nitin Thimmiah, Vivek Dhar, Harbir Singh Sandhu and Harjeet Singh. It also includes players from Australia, Netherlands, Malaysia and Spain. The team’s coach is Roelant Ottmans, former Netherlands player, while former India player Dhanraj Pillay is the team’s technical director. In 2013, the team played 14 matches of which it won 6, lost 6 and drew 2. In the match against Punjab Warriors, V. R. Raghunath scored a hat trick. The team also played against Delhi Wave Riders, Ranchi Rhinos and Mumbai Magicians.