Lucknow serves as the capital of Uttar Pradesh in North India with a vast and rich heritage. Geographically, the City of Nawabs and its culture reflect a perfect momentum as far as the recent developments are considered. Situated on the Gangetic Plain, the city of Lucknow is known to experience best climatic conditions throughout the year because of the unique geographical conditions it has got. It exists amidst several other villages and hamlets such as Kakori, Chinhat and Itaunja. Rae Bareli district lies towards its south, which has got a lot of political and historical influence. 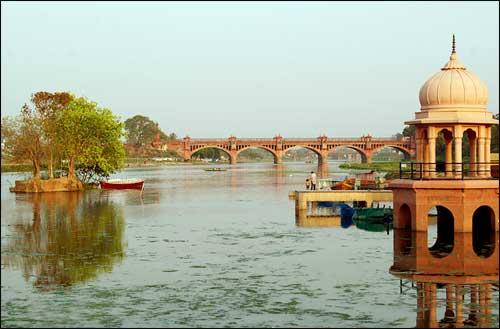 Lucknow is one of the thickly populated cities in India. According to the Census of India 2011, it has been indicated that the population has reached 2,908,455 because of the rapid progress the city has seen in recent times in terms of industrialization. Considering the population features from a religious perspective, it is determined that the Hindus are 67% of the entire population. Similarly, Muslims are accounted for 30% of the city’s population. The rest of the population consists of Jains and other religions. People from all religions coexist in the city in harmony displaying India’s unique identity of unity in diversity.

Gomti River, a tributary of Ganges, flows through the city of Lucknow covering a running area of 12 kms in total. Alternatively referred to as Gomti River in North India, the sacred rivulet is considered to be the daughter of Sage Vashist. Lucknow is held in high esteem because it is regarded as the point of confluence for three major rivers of North India known as Ganga, Yamuna and Saraswati. This point is referred to as Triveni Sangam and has found its place in several Indian mythological epics as well. River Saraswati has become almost extinct in due course of time.

People living in Lucknow experience a subtropical climate under humid conditions for most part of the year. The winters are chilly and dry beginning from December to February. The city receives an average annual rainfall of 896.2 mm with the temperatures in winter existing between 3 to 25 degrees. Maintaining enough warmth in body by covering properly during winter is very important. In contrast, leading life in summers in this city has becoming a herculean task because of the extreme weather by each passing year.

Lucknow is previously known as Awadh (Oudh as per British) flourished during the 17th and 18th centuries. Chikankari, the popular embroidery work, has first originated in Lucknow and quickly spread across the rest of India. As far as the other art forms are considered, Lucknow is the place where shayaris and mujras are organized regularly. The city has produced numerous legends such as legendary Bollywood music composer Naushad Ali, famous lyricist of Hindi cinema Javed Akhtar and Kathak dancer Birju Maharaj. As far as the linguistics is considered, Urdu is an official language after Hindi. Several historical monuments and classic structures could be considered in the city, which increases the grandeur further.