Basking in the glory of its rich tradition-steeped past, Lucknow, continues to mesmerize the expats with its beautiful imambaras, grand palaces and mostly, its delightful nawabi cuisine. The city’s Awadhi cuisine is a reflection of the elaborate and refined lifestyle led by the nawabs during 18th and 19th century. 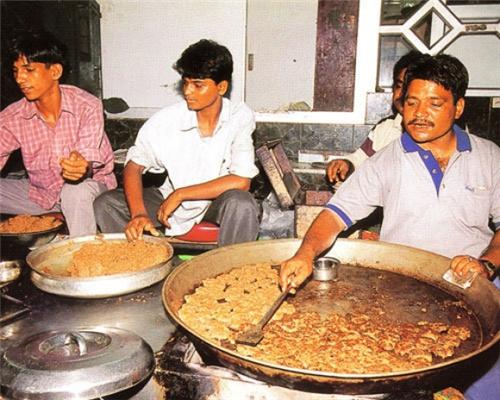 The Awadhi delicacies, the true cuisine of Lucknow, remind one of the creamy, spicy foods that were very typical of the Mughal era. The cuisine, once a platter for the who’s who of the society has now turned into a favourite north Indian cuisine for people both in India and abroad. In every nook and corner of the city, you will find a stall, kiosk doling out handful of kebabs, romali rotis, different types of biryanis, goshts and many other nawabi items. The modern and cosmpolitan Lucknow offers a host of food delicacies that are international, less spicy and are a big hot among the teens.

The secret behind the exotic, aromatic and colourful dishes of Lucknow are its ingredients. The nawabs loved their platters decorated with saffron, raisins, cashews, almonds and dollup – ful of thick cream. A trip to Lucknow will always be incomplete without getting a taste of their varied range of kebabs – shami kebab, reshmi kebab, kakori kebab, seekh kebab, patile-ki-kebab, tunde kebab, tandoori kebab and Gutwa kebabs. These dishes spiced up with cinnamon, cardamom, ginger, garlic, chillies, peppercorns, Bengal gram, onions are marinated for long hours before it’s served and the kebabs will instantly melt in your mouth as soon as you pop one – indeed a true delight.

Next must-try-out Awadhi cuisine is definitely a pot full of biryani accompanied by any of an aromatic Gosht, Korma, Kaliya, salaan, pasinda, haleem, dal gosht. Meat is the core ingredient of all these items. The meats are firs braised in hot charcoal and then stewed with thick gravy. Each item has their unique distinct taste and flavour because of the different spices used in each of them. These gravy items also go well with plain kulcha, nahari-kulcha, paratha, sheermals, romali roti or tandoori rotis.
Other famous Lucknawi platters are different types of rice items that are finely mixed with meat in form of pulao and chulao.

Not just savoury, the nawabs also had great sense of knowledge on desserts. With just the amount of sweetness and aromatic flavours, it didn’t take long for these nawabi desserts to make a name for itself all over the world. Its famous dessert dishes are:


Lucknow is also famous for its street chat corners and khasta khachouri and kulfi. Kachouris made with ghee or dalda and a spicy potato curry as an accompaniment, khasta kachouris are a big hit among morning-walkers and joggers.

Chaat is a mixture of boiled potatoes, peas, crisp dough and spicy chutney. This simple and easy-to-make recipe has made chaat a world famous delicacy.

If you have a sweet tooth, don’t forget to try out the Lucknowi kulfi that is silkier, creamier and softer than any other kulfis found in the country. Go for all the flavours – kesar, rose, pista, malai, cardamom and mango – you will love them all. You can have the kulfi with or without the faloodas.

Lucknow is a paradise for all those who love food and flavour. The cuisine bears a resemblance with the cooking patterns of Middle East, Central Asia and parts of northern India as well as Hyderabad. The secret behind the delightful taste of Awadhi cuisine is the art of braised and slow cooking which is also known as the dum style of cooking.

It has been a ritual among the Mughals to sit and share the ceremonial dining spread, known as Dastarkhwan. The menu of Dastarkhwans changed with seasons and festivals. The menu is still largely followed in contemporary times. If you are visiting Lucknow during winters try out Paye, Shab Degh, the two prominent dishes of the season. Paye is cooked on slow fire all night and is eaten with soft naan. Shab Degh is a turnip dish cooked overnight with meat balls and thick gravy. Partridge and quail meat were also popular during the cold seasons. Carps among all other fishes were the first preference during this season. Among vegetables peas dominated the season.

Spring offers yet another different yet delightful feast of flavour and aroma. Crispy snacks like pakoras, khandoi, birahis and laute paute. Desserts were mainly kept for summers. Though these spread are available all-year-round, but having them on their right season give surely a nawabi touch to your platter.

During any festive season entire aroma of shemaiyyan, halwa, haleem, korma fill the air of the city.

Love for food among the residents of Lucknow is evident from the buzzing food stalls all over the city. Almost every lane and street have kiosks selling mouth-watering Lucknowi cuisine. Needless to say, hundreds of hotels and restaurants are busy 24X7 serving some of the best Lucknowi cuisine. To make your task a little simpler, here’s a food guide that will direct you what to eat and where.

For finger-licking Khast Kachuri go to Ratti in Hewett Road. Aminabad in Lucknow is also a favourite spot for food lovers in the city.

When in Lucknow, try for a visit at Oudhyana in Hotel Taj Majal and Talaknamer Hotel Clarks, Avadh as they are the best when it comes to nawabi platter. For a more pocket-friendly Awadhi cuisine check out Shekhawat, Chhote Nawaab, Mughlai Mahal, Nausheejan, Daal Mein Kala and small eateries in Shahganj. Also go for Rahim's Nehari Kulcha located in Chowk Bazaar.

If you prefer thandais or cold shake, a must go place are Sri Lassi Corner and Raja Ki Thandai at Golewaza entrance in the Chowk.

You would be wrong if you think Lucknow is all about Awadhi cuisine. There are a number of restaurants and hotel that serves delicious multi-cuisine dishes from Thai, Italian, Mexican, Continental, Turkish and many more. For some of the best international cuisine in the traditional city Lucknow go for Royal Cafe at Hazratganj, The Posh Pouf and Marine Room - The Picadally at Alambagh.