Situated in the north east of Raj Bhavan, in Lucknow cantonment area is the impressive and remarkable Dilkusha Palace. Though now in ruins, the leftover is clearly evident of the architectural merit and artistically beautiful creation built by Nawab Sadat Ali Khan and Nasir ud din Haider.

Dilkusha Kothi is an 18-century built house in the English flamboyant style in the quiet and peaceful Dilkusha area of Lucknow. The house was an important part of the Seige of Lucknow in 1857. However, today there are only remains of fabulous creations in terms of walls and towers and extensive gardens which is a beautiful place for tourists, evening walks, recreation and relaxation. 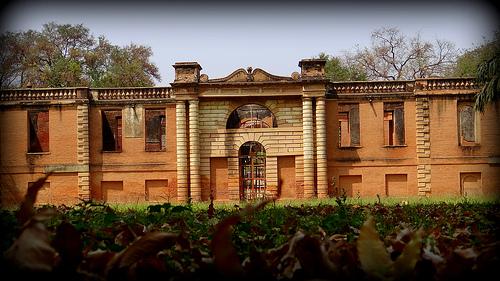 It was in 1800 that Nawab Saadat Ali Khan along with his British friend Major Ouseley, intended to construct Dilkusha Kothi with the intention to use the same as a hunting lodge. Later the place also served as a summer relaxation spot for the Nawabs. Located on the banks of River Gomti, this is a tall structure and very different from traditional Indian architecture. There were some changes in the design of the building which was implemented by Nawab Nasir-ud-din Haider during 1827-1837. However the Palace was absolutely ruined at the time of Lucknow Seige and on every walls there were gunshot marks which shouted the sacrifice of brave freedom fighters. In November 1857, Sir Colin Campbell, who was the Commander-in- Chief then, took over the palace with the help of British forces.

The main building of Dilkusha Kothi is situated in the western part of the north south axis. This is exclusively created for the Nawab. It was a palace close to the hearts of Nawab and that is why it was named Dil kusha ( happy heart). It is designed in higher platform facing west which can only be understood by seeing the bastions which flanked it. The ruins also provide evidence of small rooms on one side in a series which clearly says that it was the guard room. The roof of the building was completely destroyed at the time of war in 1857 damaging the eastern side more and thus ruining the architectural brilliance. However, with the initiative of the Government and Archeological Survey of India, the Palace has been restored.

On the north east of this building lies another mansion which also has an Indo European style and brilliant architecture. The double storied palace is made of Lakhauri bricks and lime morter. With white plaster all over it looked absolute stunning. The purpose of this palaces were to serve as pleasure resorts and hunting lodges since the surrounding area were covered with dense jungles and ferocious wild animals.

Excessively beautiful Garden mark the surrounding of Dilkusha Kothi. It has been maintained by the Archeological Society of India. Though the footfalls of the locals are limited in summer, the scenario completely changes in winter. Several foreigners from different parts of the world come and visit the place. Kids and teenagers and many other people consider this as a lovely picnic spot to spend the whole day with friends and family.