Dewa Sharif, also referred to as Deva Sharif, is the tomb of Syed Waris Ali Shah in Barabanki district, 42 kms away from Lucknow, in Uttar Pradesh. It was erected in the sacred memory of Waris Ali Shah – a sufi saint, and is the site of a large annual fair during October and November quite similar to the Pushkar fair in Rajasthan. The festival lasts for ten days and attracts devotees from all religions who come to offer their humble prayers at the shrine and stay nearby for the entire duration. The tomb is a symbol of universal love and brotherhood. 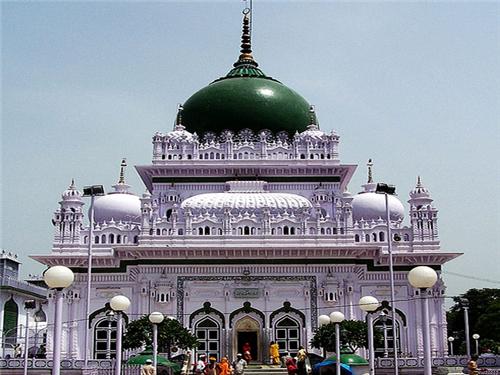 Haji Waris Ali Shah came from a family of Hussein Syed and grew up to be a Sufi Saint whom both the Hindus and the Muslims held in high esteem. He was born in the first quarter of the 19th century and was regarded as a perfect follower of Vedanta principles. On April 7, 1905, this holy man left for his heavenly abode and he was buried at the spot of his death. A beautiful moment was later erected in this place by some of his most dedicated followers, comprising of Hindus as well as Muslims. This came to be known as Dewa Sharif.

Dewa Sharif Mela is held every year to commemorate Sufi saints Qurban Ali Shah and his son Haji Waris Ali Shah. Devotees from all over Uttar Pradesh and India come here to pay their respects to the saints. The main charm of the fair lies in its huge cattle market. Various important cultural programs are prepared during the Mela by both the Governement of Uttar Pradesh and the State Waqf Board. These include:


How to reach Deva Sharif Dargah

The spot is well connected from the Lucknow Railway Station (Badshah Nagar or Charbagh), Lucknow Airport and Lucknow Bus Stations. You can hire a prepaid cab from Amausi airport in Lucknow to reach the shrine. It is situated about 40 kms away from the railway station and can be reached within an hour. Dewa Sharif is also closest to main Faizabad Road.

Although the shrine is very easy to reach, it is advisable that you take along a Dewa Sharif Barabanki Map complete with driving directions along with you if you plan to drive your own car from Lucknow to Dewa Sharif.

The shrine can be visited at any time although it is better to come here at the time of Urs, the annual fair, to catch the place in all its festive glory, teaming with religious-minded people from all over India and tourists from the world over.