Awadh finds a mention in the religious scripts of Ramayana. Today Awadh can be described as the colorful vibrant city of Lucknow. The birth of Chhota Imambara is very interesting. The chronicles of history relate to use a tale where in the early part of the 19th century Oudh as it was known then, was visited by famine a few times. The famines broke the agriculture economy and poverty hit the farmers and labors. Muhammad Ali Shah, the then Nawab of Awadh sanctioned the building of Chhota Imambara as a means to offer them some work and help the farmers to earn a decent living. The Chhota Imambara got completed in 1837 and it has been referred as the Palace of Lights by British historians who were amazed at the beauty of the building when it was lit up on specific festival occasions and illuminated the city with untold beauty. 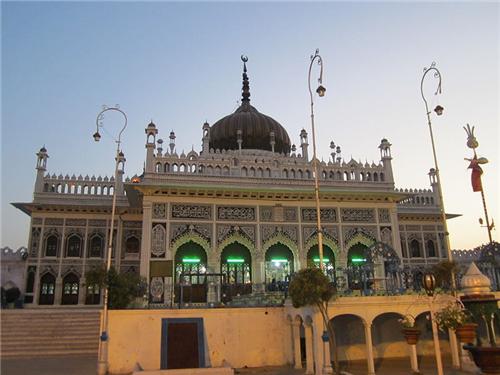 Chhota Imambara has been built on the design inspired from Charbagh pattern. This design consists of a single stream running through the center of the garden. The building of Chhota Imambara showcases elements of Persian and Indo-Islamic architecture. When you enter the cool interiors of this monument, you would see a few beautiful Arabic glasswork and calligraphy which blends with the natural beauty of the place. The chandeliers decorating the interior of the monument would take you back to the grandeur of these Nawabs and you would be surprised that these glasses were imported from Belgium.

The remains of Muhammad Ali Shah and his immediate family is the resting place, in the interiors of Chota Imambara. The white dome of this monument is a feature that can be viewed from far and also other forms of architecture like minarets and turrets. There is also a watchtower situated in the outside are of the monument and the building of this tower was abandoned after Ali Shah died. Strangely it is called Satkhanda but it is only four-storied tower.

When you visit Lucknow, you are enthralled with the grandeur and heritage that it showcases of India and you take pride in its glory. Chhota Imambara could be described as a living monument of the grandness of the Awadh Nawabs and their immense contribution to the culture and history of India.

Location and Other Details

Chhota Imambara is located in the old portion of Lucknow today and in the chowk region. This monument is well connected with various locations in Lucknow and you can reach there by taxi, auto rickshaw and even rickshaw. Usually tourist visiting the area starts their tour with Bara Imambara and then Chhota Imambara. If you want to enjoy the in depth knowledge of Chhota Imambara it would be a wise idea to seek the help of a guide who is available for a minimum rate of Rs 20/- onwards. The entry ticket would be around Rs10/- and you can also visit other adjoining locations like Jama Masjid, Clock Tower and Rumi Darwaza. It would be a wise decision to keep your shoe with a shoe caretaker and this would cost you around Rs 2/- per pair.