Hussainabad Picture Gallery is the oldest picture gallery in Lucknow. Built in the 19th century by the third Nawab of Lucknow, Mohammad Ali Shah, this stately architecture was formerly used as a summer house for the Royals. Originally addressed as Baradari meaning, a building with 12 doorways, this gallery is presently one of the hottest tourist spots in Lucknow. 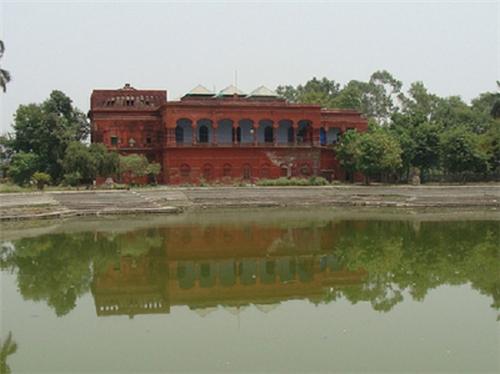 A step into the territories of the gallery and you know why the nawabs loved to spend their summers in Baradari. Tall evergreen trees acted as a perfect shade during those scorching summers days complimented with a huge pond filled with lotus plants and fishes that accentuated the beauty of palace right beside the pond. The beautiful garden area of the gallery is a perfect spot to enjoy the sun setting behind the minarets and mosques of Lucknow that are clearly visible from the garden.


The calming effect of the gallery property continues to be a reason for the gallery’s high tourist rate. Baradari also has a mosque and a hamam (bathing section). During the nawab era, there was also an inn, a market known as Minaa bazaar and stables for elephants and horses respectively.  What makes this pink terracotta double storeyed buiding different from others palaces of the Nawabs is the presence of iron pillars in the upper storey pavilion. This is a rare sight in Nawab palaces.

Many opine that “picture gallery” is a misnomer as the gallery is just a small part of the palace. The gallery exhibits life-size portraits of the Nawabs of Awadh reigning between 1882 -1885 and gives the viewers a good insight on about the lifestyles of the Royals. The paintings were made by visiting European artists, Dawling, Gravet, Harrison and an Indian painter D.S. Singh. One of the striking features of Hussainabad Picture Gallery is the portraits. You can see the eyes, heads and shoes of the portrait moving with you as you move left or right. It is also believed that the paintings were done on elephant skin and that the core ingredient of the colours used is diamond. 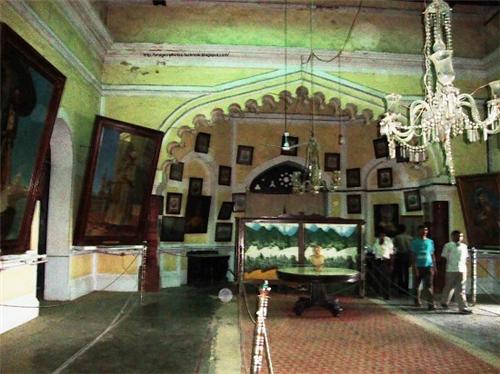 Hussainabad Picture Gallery is ideally located with the Chota Imambara just a throw away. The grand and gothic Hussainabad Clock Tower and Satkhanda (an edifice built in the model of Babylon’s floating garden or minaret) are also in vicinity. To amuse his British and European friends Nawab Mohammad Ali Shah had also built a Gendghar or a bowling alley adjacent to Baradari.

Quite recently, according to a report stated by Archaeological Survey of India, the preservation of Hussainabad Picture Gallery was in danger due to residential encroachment in the building. Lucknow bench of Allahabad Court ordered immediate evacuation of residents from the building to safeguard the cultural heritage of the city.

Hussainabad Picture Gallery is undoubtedly a place to visit if you are a lover of architecture and is in mood to spend a lazy day hanging out in the beautiful gardens of the city.

Opening hours: 8.00am – 5.00pm (Open all week)
Ticket charges: If you have a ticket for Bara Imambara, you will be granted admission else pay Rs.20.