If you talk about Lucknow, one place that clicks at a go is Bara Imambara, which symbolizes the city and its rich culture and history. It’s a huge complex that was built by Nawab of Lucknow Asaf-ud-Daulah in 1784, which is also known as Asafi Imambara. Bara means something big, while the term imambara is a shrine, which was meant for the Shia Muslims for their religious activities mainly the Azadari. This building is among the oldest and grandest places in the city, which is among the popular tourist attractions of Lucknow. Every year you see countless domestic and international tourists visit this place and explore its grandeur and majesty of the building. 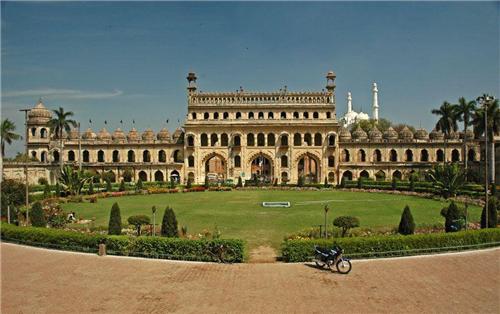 As said earlier, it was constructed in 1784 by the fourth Nawab of Awad called Asaf-ud-Daulah, which was basically built as an important relief project for important food shortages (famine), which occurred in 1784. The idea behind its construction by the Nawab was to give employment to countless people suffering from the devastating famine. Hence as per records many people used to work during the day time while building up this edifice whereas the elite class and noblemen worked during the night. In history, this project has been referred as Keynesian kind of intervention in order to create employment in the area. The construction of this Imambara was finally completed in 1791. As per estimates, the cost incurred to build up this grand building was around million Indian rupees. After its completion the Nawab was seen investing around 5000 rupees on its decoration and aesthetic purposes on a daily basis.

The architecture of this grand building is very much unique in terms of design and style and hence showcases the complete maturation of adorned Mughal design especially the mosque called Badshahi Masjid. This mosque is among the last projects to complete in Bara Imambara project that was constructed without a single use of European elements like iron in the architecture and yet is among the robust and strong structures in the country. The main Imambara comprises of a big size vault in a shape of central chamber that has the tomb of the Nawab - Asaf-ud-Daulah. It is 50 by 16 meters of the surface area having 15 meters of height and surprisingly not a single pillar is seen supporting the roof. This makes the Bara Imambara as one of the biggest arched buildings in the world having not a single beam supporting the roof. This has become possible only due to the interlocking system of bricks, which is strong enough to hold such a huge ceiling till date.

In this building there are eight different surrounding chambers that are constructed to different roof heights, which allow the area above these to be reconstructed over the three dimensional labyrinth (Bhool Bhulaiya) having passages that interconnects with one another via 489 identical doorways. This entire portion of this building happens to be very much complex and hence termed as Bhool Bhulaiya, (is covered in a separate heading), which is an important attraction to tourists who are keen to explore this place. Just outside this place, an 18 meters high gate is constructed called the Rumi Dawaza, which is embellished with lavish kind of decorations that is located as the western side of the premises.

Above the Bhul Bhulaiya space you can have one of the most scenic panoramas of Lucknow, which is incredible breathtaking experience. One of the interesting things about Bara Imambara’s design is that it was decided through a competitive process wherein expert designers and architects from different areas participated and a Delhi based Architect called Kifayatullah won the prize and his design was chosen to build this grand monument. This same man is laid buried in this same area after his death just to remember his skill sets and legacy of being great architects of his time. This building also include a big size mosque called Asafi Masjid, the Bawli (a step well with running water), and the famous Bhul Bhulaiya (the Labyrinth). The two imposing gateways finally lead you the main hall.

If Taj signifies the everlasting love, Bhool Bhulaiya of Lucknow in Bara Imambara is simply about romanticism and getting lost in this place. It was constructed Daedalus like a dungeon in order to hold the Minotaur. This structure was intentionally designed to get confused while moving inside and get lost simply for the people who were seen getting disoriented and finally was imprisoned here with their own bewilderment sense. However, if you are smart then looking at its multiple doorways or windows you can make your own ways to the exit. Though that’s not a simple nut to crack after all you need to by heart all your GPS system to find the right track.

The Labyrinth or Bhool Bhulaiya is built at the top over the central hall of the Imambara building wherein you can see a series of balconies and several grilled windows called as Jharokas, which offer you the right glimpse of your location and the direction you need to move ahead. Apparently this entire Labyrinth came into being only due to the innovative design of central hall of Bara Imambara. Theoretically speaking the Bhool Bhulaiya is considered as a single flawless path, which lead to the point while one should just walk back the very same manner.

Further, you will find a maze wherein you will see multiple paths breaking out, while each and every paths consequently break off into some other treads or paths. The entire labyrinth is located in the three floor of the Bara Imambara building, which is surrounded by 489 galleries without any door wherein you can easily move endless for long hours that makes this place very much mysterious. You can find a number of points inside rising or descending, which seem so funny but at the same time can easily misguide you leading to sheer confusion. The entire structure of Labyrinth comprises of a number of strategically designed hollow spaces in the corridors. Also, you would find a number of blocked passageways, which as per the experts lead to some underground passage close to the Gomti River. In other words, it is termed as a great treasure, which is hidden in so many secret tunnels inside the maze that may be difficult to explore without a guide.

The monument is open every day from morning 6am to evening 5pm and its entry fee is 350 INR.