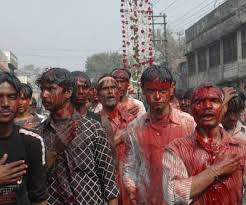 Lucknow, popularly known as the City of Nawabs has the largest population of Shia Muslims in the country. The well known Nawabi culture is well reflected in the customs, traditions and festivals and fairs of Lucknow. The mourning in Lucknow, Azadaari is a procession which started during the reign of the Nawabs in Awadh and continued till 1977. These processions had a long history of controversy which led to clashes between the two communities. In the year 1998, the Shia muslims got the permission of the government and took out the first Azaadari procession after the ban of almost 21 years. This was done under heavy security cover though.

One of the most famous customs, which is carried in Lucknow is the Azadaari. This custom is also called as mourning in Lucknow, which is a traditional custom in practice. This is conducted in the memory of Imam Husain Ibn Ali who died in the battle of Karbala thousands decades ago, during the period of Muharram, a festival of Muslims. Generally Muharram is a Muslim festival that is carried on for 68 days every year. This festival starts on the eve of 29 Zill-Hijjah and ends on the evening of 8 Rabi-al-Awwal. There are certain customs like Majalises and processions which are carried on during Muharram in the memory of the deceased emperor. This festival would be carried on by Sunni Muslims, Hindus and many people as a gratitude for deceased emperor.

Lucknow is the city of Nawabs and is known for the Shia Muslim culture Azadaari. The processions that carried during Muharram was started during the reign of Nawabs of Awadh. Processions like Shahi Shari, Jaloos-e-Mehndi, Chup Tazia could be seen in Lucknow during Muharram. These processions started during the reign of Nawabs and continued till 1977. After a clash between the 2 communities Government of Uttar Pradesh banned the Azadaari Processions in 1977.

According to Shia sources, the Azadaari of Muharram was basically started by the prophet's family members after the death of Muhammad’s grandson Husain Ibn Ali in a battle in 680AD. After the battle of Karbala, the granddaughter of Muhammad and the sister of Husain, started the mourning for the deceased brother and also started delivering speeches against the opponents who killed her brother. The news of Husain Ali’s death spread like a fire in Syria, Iraq and Hejaz. The opponents, who had killed Husain and had also captured 72 others companion of his, including a woman and a child, later released the women and the child, as this could turn into a revolt against the ruler.

The leader then consulted Muhammad family and asked them whether they wanted anything in return. This was when the sister of Husain requested for a place to mourn for Husain and others of the Muhammad’s family. A house was granted for the purpose. This was where the first mourning of Muharram was started. This culture basically originated from Iraq, as this was the place where Husain was deceased to death by his opponents in the battle. This custom of mourning is known as Azadaari in India.

In 1906, Azadaari caused a communal tension in Lucknow, which was for the fourth time, and it was then the Azadaari in India was banned by the Government of Uttar Pradesh. The Muslim communities held protests, which resulted in the death of many Muslim youths, only after which the government permitted the Muslim communities to carry on only 9 of the processions of 900 as Azadaari during Muharram.

According to the Islamic calendar, Muharram is celebrated in the fourth month of the year, during which the feast is celebrated. As the Islamic calendar is based on the lunar calendar, it differs from the Gregorian calendar and hence the festival moves from year to year. The word Muharram basically means Forbidden, which is derived from the word haram meaning sinful. The tenth day of the festival is the day of ashura on which the Muslim community takes part in the mourning. Most of the Muslims fast during the month of Muharram.

Shia Muslims start mourning on the very first day of Muharram and carry out the same for the next ten days. The last day that is the tenth day is of vital importance because it was the day on which Husain and his followers were killed in the battle by the army of Yazid. Every year a huge number of people gather at the Azadaari in Lucknow in order perform the Namaz and the corresponding mourning session.