With the growing popularity of water parks around the country, Amrapali water park captures the imagination of every mind in Lucknow and around by its sheer magic, making it one of the happiest places created by technology. The park has the highest number of water slides in the city with live DJ. Children can enjoy camel rides and the elderly can take a trip in the paddle boats. Visitors can also take recess from the excitement in the many AC cottages in the park. 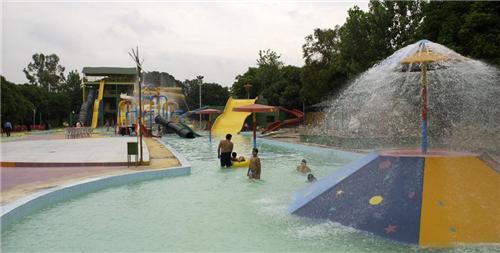 Facilities at Amrapali Park in Lucknow

The amusement park industry in India, especially the water park sector has shown exponential growth in the past two decades. Today, it stands as an integral part of leisure industry, contributing a considerable portion of the total revenue generated. Lucknow is known to have a quite hot and humid climate for most of the year which explains the success of the many water parks in the city. The city is also known for its other famous tourist points drawing a lot of people from all over the country. The Amrapali water park plays an important role in the development of tourism in Lucknow.

Other Facilities at the Park

Ticket price at Amrapali Water Park is about three hundred rupees (Rs. 300), which can be considered as a little high, however, looking at the fun options for all age groups and the average footfall, this price can be considered reasonable. Visitors can carry their own swim wear or they are available for hire at an additional cost of about fifty rupees.

Speaking of weather conditions, Lucknow experiences certain extremities of heat and cold. Summers can be quite harsh while winter temperatures may fall below 5 degrees at times. Though most tourists flock to the city between the months of March to October since it is the best time span when people can roam outside, visitors of water parks do not necessarily follow the same pattern. Amrapali Water Park has its major share of visitors throughout the summer months, however, it is advisable to stay out of the water during the months of May and June as the temperature could rise to as high as 45 degrees and such heat can be quite harmful.

Amrapali Water Park is a park that can stand apart with some really good quality rides and swimming and splash pools and attracts fairly good number of visitors around the year. New rides are being added to upgrade the park. Some of the rides that are more popular with the crowd are the crazy cruise, aqua trail, black hole, float slides etc.